Although long-beaked echidnas are experiencing drastic population declines and are at high risk of extinction, the short-beaked echidna is common and well-protected in Australia.

Due to overhunting and habitat loss, long-beaked echidnas have experienced declines of at least 80% since the 1960s. All are Critically Endangered (IUCN).

No major threats in most of its range (i.e., mainland Australia)

Notes on overhunting of echidnas 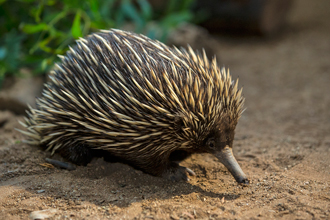 Short-beaked echidnas are common and protected in Australia, but have become rare in New Guinea due to overhunting.