Often solitary (from Ferguson-Lees and Christie 2001)

Nest sharing and take over 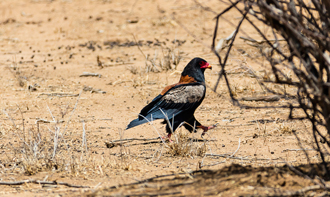 In addition to being acrobatic fliers, Bateleurs are often seen walking and performing a "greeting ceremony" on the ground.