Body shape (from Ferguson-Lees and Christie 2001 unless otherwise noted)

Facial characteristics (from Ferguson-Lees and Christie 2001 unless otherwise noted)

Juvenile plumage (from Brown and Cade 1972 unless otherwise noted)

Dimorphic in appearance (from Kemp et al. 2013 unless otherwise noted)

Features of age and sex classes (from Brown and Cade 1972) 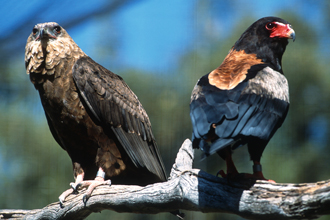 Plumages of a juvenile (left) and an adult (right) Bateleur.