Warmth of the Sun 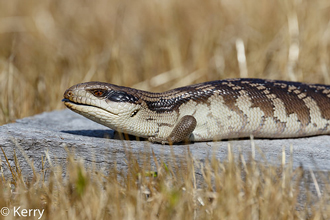 A wild eastern blue-tongued skink sunning on concrete in a suburban yard.

This is one of the few large Australian lizards that adapts well to suburban areas and cities. This skink use hard surfaces, such as roads and drain pipes, for sun basking and shelter.