Feeding on the Bottom 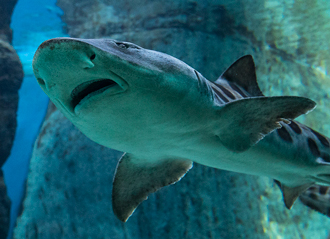 A leopard shark's mouth is positioned on the underside of its snout, helping it to feed on prey that live in the sand or mud.

Also note the nostril flaps ("nares") that direct water into the shark's nose and enhance its sense of smell.