Algae and plant matter thought to be prominent

Research note: Studies investigating diet composition using only gizzard contents have characterized Freckled Duck as being “mainly herbivorous,” but Briggs (1982)—who reported on gizzard as well as esophagus contents—indicates that examining only gizzard contents may underestimate the amount/presence of invertebrates. Frith et al. (1969) also suggest this. Research across a range of geographic and seasonal conditions may be needed to confirm diet composition. 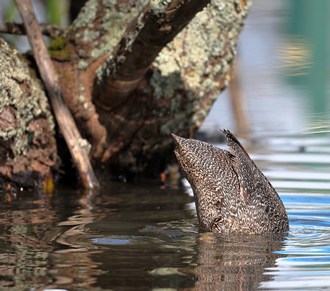 Freckled Ducks feed just above the bottom, not in the mud.