Most often described in literature as nocturnal, with some activities occurring during the day
Recent study, however, of 59 radio-collared individuals on St. Bees Island, Queensland revealed koalas travel nearly the same distance in the day as at night (Ellis et al. 2009)

An adult spends about 19-20 hours/day sitting, sleeping
In a study of koalas at the San Diego Zoo,

Viewed as non-social but live alone within a complex community (Ellis et al. 2009)

Besides bellowing, four types of encounter calls: (Mitchell 1990a)

Both males and females use urine and feces to scent mark objects in their environment
Males also use sternal gland on chest to leave chemical signals, mostly at the base of trees

Arboreal, but must travel on the ground to move to another tree or stand of trees; travel on all fours (Grand & Barboza 2001)

Dingos and humans today are only significant natural predators on adult koalas. (Smith 1987)

Sleeping on a Limb 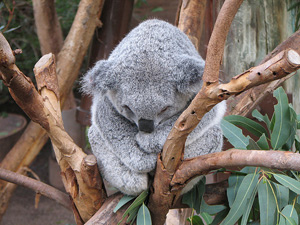 Dependent on a diet of Eucalyptus that’s low in calories, koalas survive with a low metabolism and a habit of sleeping or sitting 20 hours a day. Dense wooly fur cushions the koala from branches and protects from extremes of the weather.