Male shows no obvious courtship behavior, other than bellowing and scent marking trees (Bercovitch et al. 2006)
If male approaches, female tries to back away and makes defensive vocalizations

Females are induced ovulators, unlike most other marsupials

Breeding: October - November (spring) in southern hemisphere
Inter-birth interval: once every 1 - 2 years
Females are seasonally polyestrous (repeated estrus cycles during the breeding season) (Johnston et al 2000a)
In a study of a female koala in managed care, a pre-estrus state may be predicted from (Takahashi et al 2009) 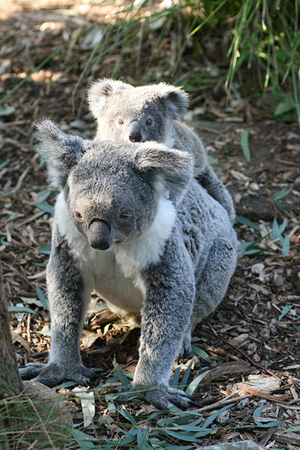 Young koalas stay in the pouch for up to 8 months.

After exiting, they travel on their mother’s back and continue nursing for another 4 months. They will stay with the mother until the next joey is born, sometimes not until two years of age.