*Females can be 50% smaller than males. *Size varies by latitude - smaller in north

Eyes with slits of pupils vertical rather then horizontal as in other marsupials (Jackson 2003)
Marsupial pouch in koala opens towards the bottom of the pouch, facing outwards (not up or back) (Australian Koala Foundation 2010):

All toes with long, sharp claws except first digit of hind foot.

Small brain: 0.2% body weight; one of smallest in any marsupial 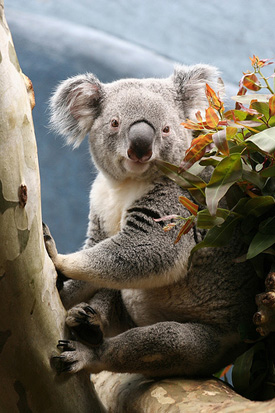 Their second and third toes are partly fused and wrapped with a single sheath of skin but each toe retains a claw.