Introduction to the egg-laying mammals

Other colloquial or local names 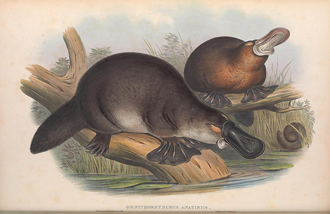 An illustration of two platypuses by John Gould (1863).

Here, Gould focuses on the bill, webbed feet, and thick tail of the platypus. In the lower right, a platypus is in a curled posture (adopted while sleeping and likely to be the position a female adopts while incubating her eggs).

This sketch was completed during a trip that Gould made to Australia from 1838-1840.

"Ornithorhynchus anatinus"; Plate 1 in John Gould's The Mammals of Australia (1863).