* Because hyenas gorge, it is difficult to get accurate weight measurements. Both wild and zoo-kept females tend to weigh more than males. While weights for wild females may be bias due to social hierarchies that dictate access to food, individuals raised in zoos have controlled diets, a fact that suggests true sexual dimorphism in body weight.

Coat/Pelage (summarized from East and Hofer 2013 unless otherwise noted)

Outwardly similar, though females are heavier than males (from East and Hofer 2013 unless otherwise noted)

Chromosome number (from East and Hofer 2013)

Similar species (from East and Hofer 2013) 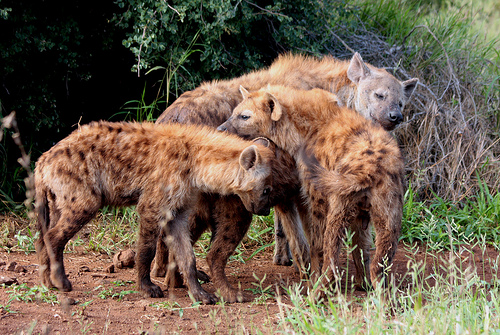 Dog-like feliforms. The dog-like muzzle and solid body build of the spotted hyena resemble that of canines, masking their more close evolutionary alliance with cats. The namesake spots are gradually acquired by cubs beginning around 1.5 months of age, and are often seen to fade with old age.