Have one of most complex societies among birds. (Hegner et al 1982)

Breeding success in this species strongly influenced by family structure. (Wrege & Emlen 1994)
Females typically leave their birth group to join the family of the male (patrilocal)

Resident birds; most of these bee-eaters spend their whole lives within the spatial limits of the population to which they were born. (Wrege & Emlen 1994)

Clan members interact on foraging territory, but each pair and helpers has different, possibly overlapping ranges.

Clan members scatter their nests throughout the colony; their nests are not excavated next to each other. (Fry 1984)
Breeding pair and helpers defend nest entrance from non-clan members.(del Hoyo et al 2001)

Because bee-eaters are colonial and construct burrow-nests, these birds enhance biodiversity by reworking the soil, thus allowing many other organisms to flourish. (Casas-Crivillé & Valera 2004)

May have colonial nest sites in association with larger groups of Carmine Bee-eaters or smaller groups of Red-throated Bee-eaters. (Fry 2001) 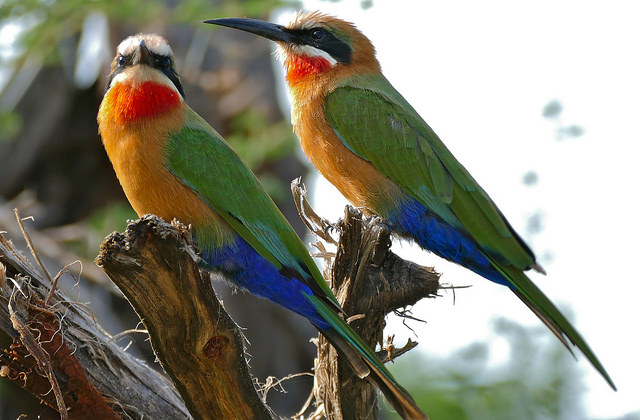